Cast iron is one of the most popular materials for cookware, and for good reason. It heats evenly and releases food beautifully, making it a favorite choice for everything from dinnertime favorites to desserts. But if you’re not using your cast iron properly, you could be missing out on some of its best features. Here are four tips to help you use your cast iron like a pro. 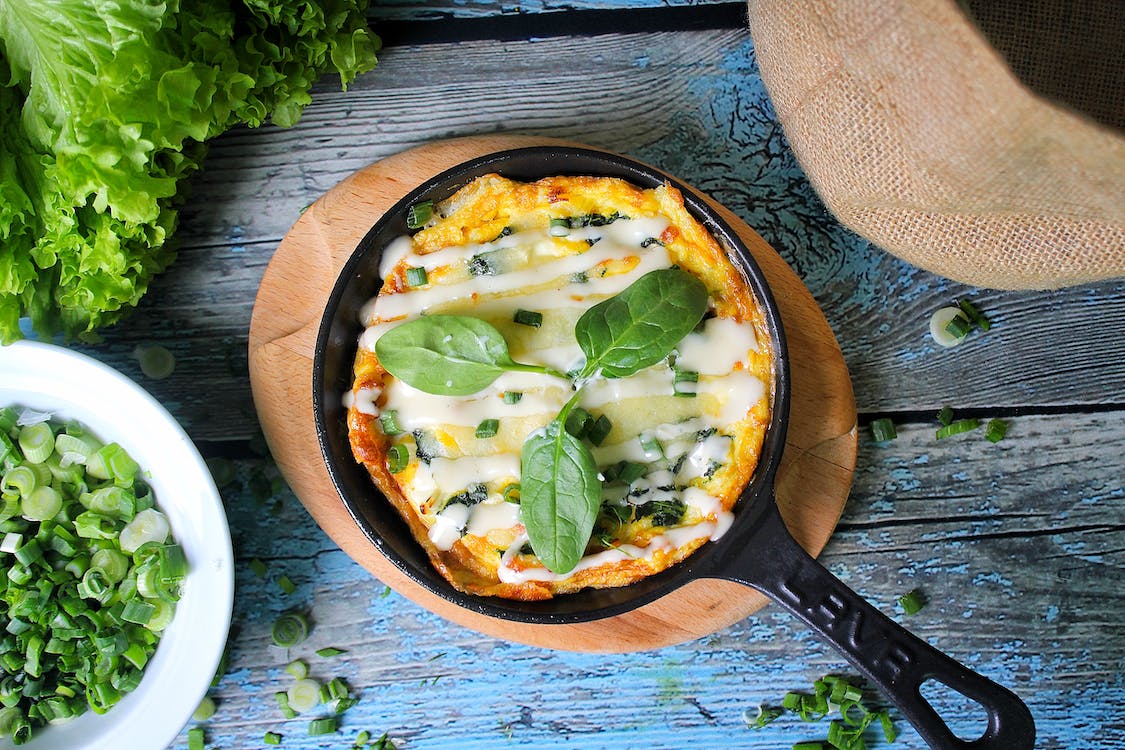 1. Get a Cast Iron Skillet

When it comes to cooking, few things are as versatile or durable as a cast-iron skillet. Whether you're using it on the stovetop, in the oven, or even over a campfire, a good cast iron skillet can last a lifetime with proper care. But with so many options on the market, how do you choose the right one for your needs? Here are a few things to keep in mind.

First, consider what size skillet you need. If you're cooking for one or two people, a smaller skillet will suffice. But if you're feeding a crowd, you'll want something larger. Second, think about what kind of cooking you'll be doing most often. If you plan on doing a lot of frying or searing, look for a skillet with sloped sides to help prevent splatters. If you'll be using it mostly for baking, look for a pan with straight sides and an oven-safe handle. Finally, take into account your budget. Cast iron skillets can range in price from under $20 to over $100. But in general, you get what you pay for – so don't be afraid to invest in a quality skillet that will last you for years to come.

Many people don't realize the importance of preheating their cast iron pan before cooking with it. By preheating the pan, you allow the metal to reach an even temperature, which helps to prevent sticking and uneven cooking. In addition, preheating helps to season the pan, making it more nonstick over time. When cooking with a cast iron pan, it's important to use high heat. This allows the food to brown and creates a delicious crust. However, if the pan isn't properly heated before adding food, it can stick and burn. For best results, always preheat your cast iron pan before cooking.

When it comes to cooking, there are a lot of different techniques and tools that you can use in order to get the job done. One of the most versatile and commonly used tools in the kitchen is the cast iron skillet. Cast iron skillets can be used for a variety of tasks, including frying, baking, and even braising. While these skillets are incredibly useful, there are a few things that you should keep in mind when using them. One important thing to remember is not to use oil when cooking with a cast-iron skillet. The reason for this is that oil can actually damage the skillet and make it harder to clean. If you do need to use oil, be sure to use a very small amount and wipe it off after cooking. With a little bit of care, your cast iron skillet will last for years to come.

4. Use a Wooden or Silicone Spatula

As anyone who has cooked with a cast-iron skillet knows, they are an essential tool in the kitchen. Not only do they conduct heat evenly, but they also have a natural non-stick surface that makes them ideal for cooking eggs, pancakes, and other delicate dishes. However, cast-iron skillets can also be quite delicate, and it is important to use the right utensils when cooking with them. Wooden or silicone spatulas are the best choice for a cast-iron skillet, as they will not scratch the surface or damage the non-stick coating. In addition, wooden or silicone spatulas are also less likely to discolor the skillet over time. As a result, they are the best choice for cooking with a cast-iron skillet.

5. Add Some Flavor with Herbs and Spices

When it comes to cooking, cast-iron skillets are practically synonymous with durability and versatility. Whether you're using it to sear a steak or bake a cake, a cast-iron skillet can help you turn out a delicious meal. However, one area where cast-iron skillets often fall short is in the flavor department. Fortunately, there's an easy way to add some extra flavor to your dishes: by using herbs and spices. Just sprinkle a bit of oregano or thyme on your food before cooking, or add some cumin or paprika to give it a little bit of a kick. You can even use garlic or onion powder to give your food a savory depth of flavor. So don't be afraid to experiment with different herbs and spices when using a cast-iron skillet - you might just be surprised at how much flavor they can add.

When it comes to cooking, there are a few things that are more important than using the right pan. Cast iron skillets are a great option for many recipes, but it’s important to avoid overcrowding the pan. If there are too many ingredients in the pan, they will not cook evenly and will end up sticking to the skillet. In addition, overcrowding can also cause the food to steam instead of fry, resulting in a less than ideal texture. When using a cast-iron skillet, it’s best to cook in small batches to ensure that each piece of food is cooked to perfection.

7. Pay Attention to the Color of Your Food

Cooking with a cast-iron skillet is a great way to add flavor to your food. However, it is important to pay attention to the color of your food when using this type of cookware. A well-seasoned cast-iron skillet will have a dark patina that can give food a slight reddish tint. This is perfectly normal and will not affect the taste of your food. However, if you notice that your food is beginning to take on a blue or green tint, this may be an indication that the skillet is not properly seasoned. In addition, if you see any rust on the skillet, it should be removed before use. With a little care and attention, you can enjoy cooking with a cast-iron skillet for many years to come.

8. Know When to Use High Heat

When it comes to cooking with a cast-iron skillet, there is one cardinal rule: never use high heat. This is because cast iron takes longer to heat up than other materials, and it takes longer to cool down. As a result, using high heat can cause the iron to become too hot, causing the food to stick or burn. In addition, high heat can cause the iron to lose its natural Non-Stick properties. However, there are times when high heat is necessary, such as when searing meat or cooking at a high temperature. In these cases, it is important to use extreme caution and to monitor the skillet closely to avoid damage. When in doubt, always err on the side of caution and use lower heat settings.

When it comes to cooking, there are a few key things to keep in mind in order to get the best results. One of those things is to make sure that you Sear when using a cast-iron skillet. This is because it helps to lock in the flavor and juices of whatever it is you are cooking, whether it be meat, vegetables, or even fruit. It also helps to create a nice crispy outside while still keeping the inside moist and succulent. So next time you are cooking with a cast-iron skillet, remember to Sear in order to get the most out of your meal!

After you've finished cooking a meal in your cast-iron skillet, it's important to let the food rest before serving. This allows the food to redistribute its juices, resulting in a more flavorful and moist dish. Additionally, it helps to prevent the formation of hotspots, which can cause burns. Finally, letting the food rest gives you a chance to check the temperature of the dish and make sure that it is cooked through. So next time you're using a cast-iron skillet, remember to give the food a few minutes to rest before diving in. Bon appetit!

After cooking a delicious meal in your cast-iron skillet, it's important to season your pan properly to prevent rusting and ensure years of use. While there are many different ways to season a pan, the most important thing is to use a high-quality oil that won't go rancid. Once you've selected your oil, start by heating the pan on the stovetop until it's smoking hot. Then, using a paper towel or cloth, coat the entire surface of the pan with oil. Be sure to get into all the nooks and crannies, as this will help to prevent rusting. Next, place the pan upside down in a preheated oven and bake for 1-2 hours. This will help the oil to penetrate the metal and form a protective barrier. After seasoning your pan, it's important to clean it with hot water and soap after each use and dry it thoroughly to prevent rusting. With proper care, your cast-iron skillet will last for generations.

When it comes to cleaning a cast-iron skillet, there is one golden rule: never use regular soap (Checkout our catalog for special cast iron soap). Some soap can strip away the preseasoning that protects the skillet from rust, and it can also leave behind a soapy residue that will make food stick. Instead, clean your skillet with hot water and a stiff brush. If there is still food stuck on the skillet, you can use a little salt or baking soda to help scrub it off. And if your skillet does start to rust, don’t worry – just scrub it down with a steel wool pad and reseason it with oil. With a little care, your cast-iron skillet will last for generations.

If you’re in the market for a new piece of cookware, cast iron should definitely be at the top of your list. It heats evenly and releases food beautifully, making it a favorite choice for everything from dinnertime favorites to desserts. And thanks to its natural nonstick properties, cleanup is a breeze.

Don't Take Our Word For it! Here's What Our Customers Think:

I love it and when the time comes, I will definitely buy this product again!

These oils are awesome. They have a strong scent and have real lasting power. I love each scent and use them all of the time